On March 6, Ambassador Shimokawa paid an official visit to Ghent at the invitation of the city. First, the Ambassador visited Ghent University, where he was welcomed by the Dean of the Faculty of Arts and Philosophy Ms. Deneckere, and also visited the Ransho garden which was offered to the city of Ghent by the city of Kanazawa. Then the Ambassador exchanged views with Rector Van de Walle. Following this, a ceremony was held to celebrate a donation of books to Ghent University by The Nippon Foundation. The Ambassador handed a letter from the President of the Nippon Foundation Mr. Sasakawa to the head of the University’s library. The Ambassador then gave a lecture about Japan-Belgian relations to students of Japanese Studies. Following this, a reception was held at the City Hall of Ghent, where Mayor De Clercq said in his speech he wishes to further strengthen exchanges with Kanazawa, and that he is looking forward to his visit to Japan in November. The Ambassador from his side said that since the sister cities agreement was concluded in 1971, the two cities have been strengthening relations in various fields such as politics, economy, culture and people-to-people exchanges, and that as Ambassador he will make efforts to promote the charms of the city of Ghent to Japan. Also, the Ambassador received an explanation from North Sea Port CEO Mr. Lagasse, and exchanged ideas with Japanese business people active in the region. 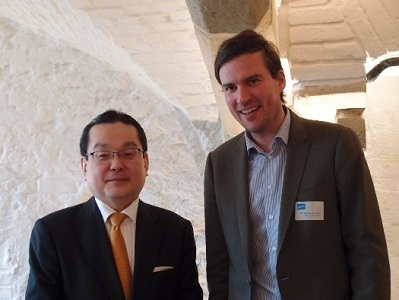 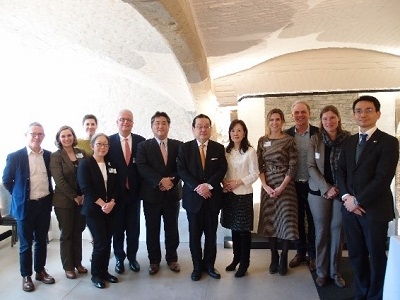