On March 11, the 9th edition of Fukko Concert was held at the Koninklijk Conservatorium Brussel, and was attended by Ambassador Shimokawa. Led by the world-renowned violinist Ms. Yuzuko Horigome, the concert has been held every year since the Great East Japan Earthquake in 2011, with the participation of various artists. This year, in addition to the dynamic performances by Feniks Taiko, a wadaiko (Japanese percussion) ensemble active in Belgium, there was a performance of the Beethoven Violin Concerto conducted by Mr. Van de Velde and consisting of the Fukko Orchestra and violinist Ms. Horigome.
Ambassador Shimokawa said in his speech that at the time of the Great East Japan Earthquake, which counted more than 15.800 deceased and more than 2.500 missing persons, he himself was in Tokyo. There, he experienced the severe shaking, and was shocked by the extreme devastation. However, warm support came from Belgium and other parts of the world. Especially the visit of the then Crown Prince and Princess of Belgium to the Japanese Red Cross organization, and their message of encouragement to the disaster-striken area is remembered well in Japan. The Ambassador further expressed his sincere gratitude to all those involved in Fukko concert.
The audience generously applauded the dynamic and perfectly in tune performances of the artists. 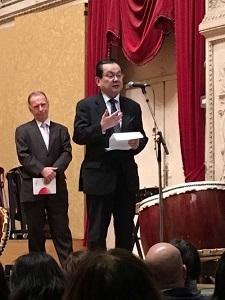 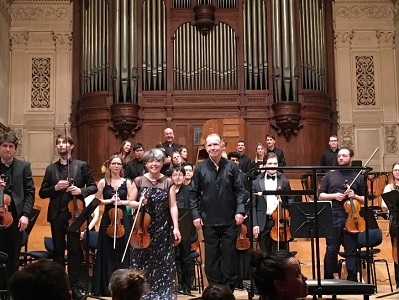