Embassy of Japan in Belgium

On January 21, Ambassador Shimokawa attended the opening ceremony for a new manufacturing line at the Genk plant in Nitto Belgium NV. This new state-of-the-art coating line makes it possible to manufacture its unique product in the world, surface protection tapes at 3.3 meter width for the glass industry that supply the wider high-tech glasses for modern buildings and skyscrapers.
The ceremony was hosted by Mr. Takasaki, President of Nitto Denko Corporation, and participants like Mr. Beke, Minister for Wellbeing, Public health, Family and Poverty reduction and Mrs. Peeters, Minister for Transport and Public Works respectively from the Flemish Government, and Mr. Reynders, Governor of Limburg and Mr. Dries, Mayor of Genk were also present at this celebration.
Nitto Belgium has been operating for almost half a century, since its first European production site established in Genk in 1974, and many attendees appreciated the Nitto’s contribution to the local community through its continued investment. 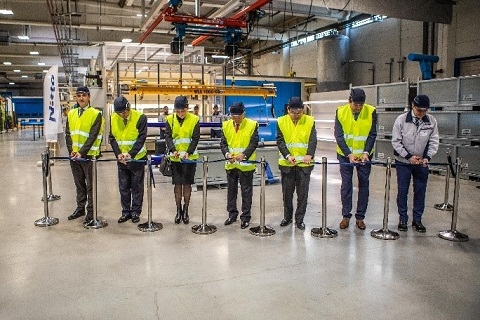