“Rakugo Performance” by French rakugo performer Cyril Coppini was held on February 26 and 27, respectively at the Japan Information and Cultural Centre (JICC) and the Université Libre de Bruxelles (ULB). Mr. Coppini, born in Nice in the South of France, is currently performing in Japanese and French in Japan, Europe, New Caledonia and the French-speaking areas of Canada, receiving much praise in every place. It was Mr. Coppini’s second performance in Belgium at the JICC since March 2018.
At the beginning of the performance at the JICC, Mr. Coppini explained what rakugo is, using a fan (sensu) and small cloth (tenegui), before bringing 3 stories called “Tokiudon” “Chiritotechin” and “Tanusai”. At the performance at the ULB, Mr. Coppini gave a detailed presentation on the history and characteristics of rakugo, before bringing “Simultaneous Interpretation Jugemu”, “Misomame” and “Tanusai”. The members of the audience could deepen their knowledge about rakugo, while being drawn into the stories of the common people’s life in Edo, many times filling the venue with laughter. 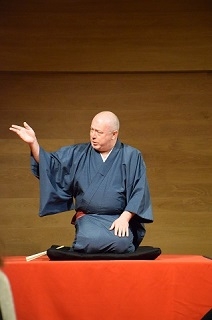 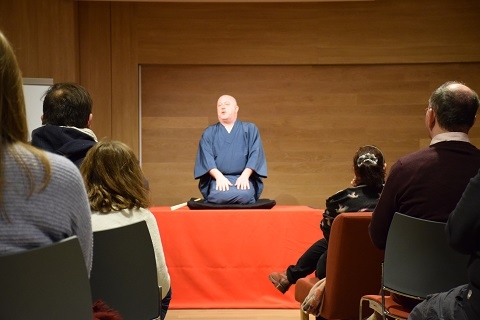